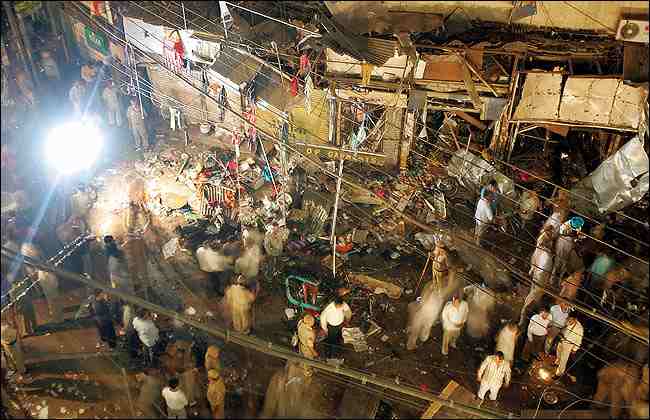 Three powerful blasts in New Delhi on Sunday who carried out coordinated attacks that killed at least 57 people, just days before major Hindu and Muslim festivals.

Prime Minister Manmohan Singh, who cut short a visit to Kolkata to rush back to the capital, blamed Saturday night’s attacks in crowded pre-holiday bazaars on terrorists, but said it was too early to speculate who was behind the blasts.

Local newspapers and international security experts were quick to point the finger of suspicion at Pakistan-based militants fighting Indian rule in disputed Kashmir and opposed to the peace process between India and Pakistan.

A previously unknown Kashmiri militant group, calling itself the Inqilabi group, contacted a news agency in Indian Kashmir on Sunday and claimed responsibility for the blasts, television reported.

S. Regunathan, the top bureaucrat in Delhi’s local government, told Reuters that 57 people were killed and about 140 wounded in the blasts, although some media said 61 people died.

More than 110 were still in hospital, many of them critically injured, some with severe burns.

Case against ‘The Simpsons’ filed by Russian Lawyer